A woman with a crippling clown phobia has agreed to pose with one in her face for a questionable photoshoot. 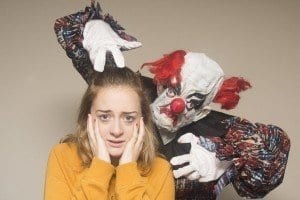 Courtney Blighton, 18, said she had to leave her flat in Leeds city centre and put her studies on hold after the numerous ‘killer clown’ sightings across the country.

Here is the English Lit student, whose clown fear seriously disrupted her life, until she was cured with hypnotherapy.

I can’t remember it starting at a certain point, but when I was a child I absolutely hated clowns,’ she said, standing next to a clown.

‘If I ever saw one on TV it used to freak me out so much, I would get really scared.

‘I used to cry and have nightmares about them.’

She then explained that she underwent hypnotherapy to get rid of her fear of clowns.

a crippling clown phobia was left HOUSEBOUND during this monthís terrifying killer clown craze. The numerous ëkiller clowní sightings which gripped the UK earlier this month forced 18-year-old Courtney Blighton to leave her Leeds city centre flat and put her studies on hold. And the teenagerís lifelong fear of clowns ñ known as coulrophobia ñ meant she would not step outside mum Lorna Blightonís home in nearby Menston, West Yorks, for more than a week. But English Literature student Courtney is fearful no more after being hypnotised to make her forget her phobia ñ and she is even planning to go clubbing in fancy dress this Halloween. Courtney’s hypnotherapist Krystyna Szczygiel said: ‘When Courtney first spoke to me she couldn’t even look at a picture of a clown without feeling anxious.

‘We used hypnotherapy to help gain control over her thought processes and feelings to create permanent positive change.

‘Changes can occur within moments in the right setting.’

Now that her coulrophobia is gone, Courtney is able to have a bit of fun and pose in photos like these 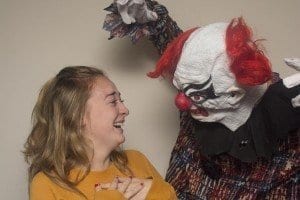