Hypnotherapy to Deal With My Skin-Picking Issue

It may sound ridiculous, but it was pretty effective. 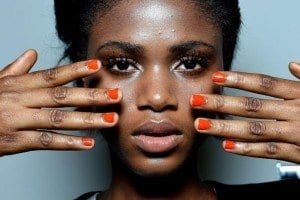 I’ve had this habit of messing with the pores that I haven’t quite been able to shake since I started doing it at the age of 15. It wasn’t to the point that I was pulling actual chunks of skin off my face (apologies for the visual), but if there were something, anything, trapped inside a pore, you better believe I would not ease up until I freed it. I would analyze and zero in on each specific spot, only to end up stepping away from the mirror defeated, red-faced, and with certain half-moon-shaped nail-marks indented into my skin. The habit got better year by year, but it was still present, and so freaking embarrassing at that.

Whispers around the internet claimed that hypnotherapy could help deal with the issue—people swore it helped them quit smoking, pulling out their hair, picking at their nails, and more, so with that, I decided to hit up hypnotherapist and stress relief expert Grace Smith. It certainly couldn’t hurt.

Perhaps due to the magic shows you see on cruise ships, people assume hypnotherapy will prompt them to make animal noises until some Gob Bluth a la Arrested Development type snaps his fingers, and you return to the real world. Smith assured me that the real deal was nothing like that.

“Hypnotherapy is more along the lines of meditation with a goal, and the way it works is that I help people relax into a state where they feel safe,” Smith explains. “Most people try to make a change when they’re really stressed out, angry, and fed up, but when you’re coming from that state, your subconscious isn’t going to make a lasting change because you’re in panic survival mode, whereas when you’re relaxed, you become open to suggestion.”

For the longest time, I just thought I had terrible skin—constantly breaking out and in the belief that I was still going through puberty, so I felt compelled to pick at it, or punish it for being bad if you will. Whether it’s hair-pulling or picking at either your cuticles or skin, Grace assures me that it was all driven by anxiety, which made total sense. On the nights I happened to be freaking out about something, I’d spend the most time in the magnifying mirror. In hypnotherapy, she would change the habit from the subconscious level, and your logical mind would follow accordingly.

“There’s some part of us that feels good when we squeeze that whitehead out, it’s weird. The conscious, logical mind knows it’s not good for us, but the subconscious doesn’t, so that’s why these behaviors continue,” she tells me. “Logic means nothing to the subconscious mind. It’s all about emotion and habit. We have to tell the subconscious that no matter how good the emotional release may be, it’s actually bad for us, but we can only have that conversation when we’re feeling safe.”

It had worked for Smith’s clients in the past—she told me of a young girl she previously worked with, who had problems with pulling out her eyelashes, and was able to stop after one session (and she has the adorable new school pictures to prove it). Of course, you have to want to make the change in order for the session to work.

“If someone wants to quit, they’ll be able to do it in a few sessions, whereas if a woman is bringing her teenage son to me and asking me to make him stop smoking because he doesn’t want to quit, it can take almost 50 sessions,” she says. “The efficacy of hypnosis is based on how much you want the result.”

Suffice it to say that I really wanted it.

Grace and I had our session over FaceTime, so after I commandeered one of the focus rooms at the office, we settled in. She told me that if I did have external thoughts that didn’t completely have to do with the session, that was fine, and just to go with it. She began talking me down and getting me to a calmer, more meditative state. Despite the noise and activities happening outside of my little pod, I was able to relax and listen to her, guiding me to visualize a safe space.

My skin was my friend, she told me. We were going to have a better relationship, I would leave it alone, and I promised to behave. It may sound ridiculous, but it was pretty effective.

HYPNOSIS: WHAT IT REALLY IS AND COULD WORK FOR YOU