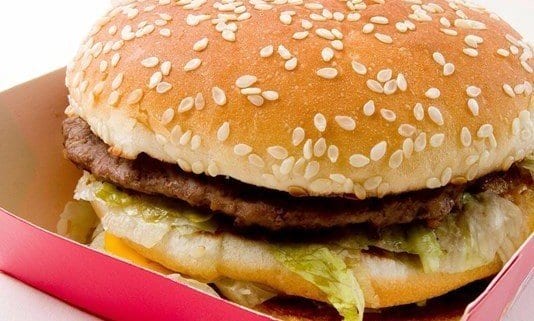 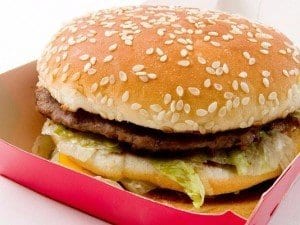 A recent study has found evidence that Americans may be consuming fast food wrapped in paper treated with chemicals linked to kidney and testicular cancers, thyroid disease, low birth rates and immunotoxicity in children.

The compounds, called per- and polyfluoroalkyl substances (PFASs), were found in 56-percent of dessert and bread wrappers, 38-percent of sandwich and burger wrappers and 20-percent of paperboard (the same kind used for sandwich, taco and French fry boxes). These same chemicals are found in stain-resistant products, firefighter materials and nonstick cookware. 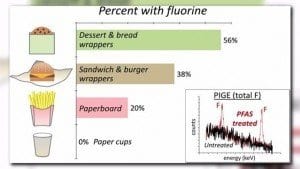 Per- and polyfluoroalkyl substances (PFASs) are highly persistent synthetic chemicals, some of which have been associated with cancer, developmental toxicity, immunotoxicity, and other health effects. PFASs in grease-resistant food packaging can leach into food and increase dietary exposure. Researchers collected ∼400 samples of food contact papers, paperboard containers, and beverage containers from fast food restaurants throughout the United States and measured total fluorine using particle-induced γ-ray emission (PIGE) spectroscopy. PIGE can rapidly and inexpensively measure total fluorine in solid-phase samples. Researchers found that 46% of food contact papers and 20% of paperboard samples contained detectable fluorine (>16 nmol/cm2). Liquid chromatography/high-resolution mass spectrometry analysis of a subset of 20 samples found perfluorocarboxylates, perfluorosulfonates, and other known PFASs and/or unidentified polyfluorinated compounds (based on nontargeted analysis). The total peak area for PFASs was higher in 70% of samples (10 of 14) with a total fluorine level of >200 nmol/cm2 compared to six samples with a total fluorine level of <16 nmol/cm2. Samples with high total fluorine levels but low levels of measured PFASs may contain volatile PFASs, PFAS polymers, newer replacement PFASs, or other fluorinated compounds. The prence of fluorinated chemicals in fast food packaging demonstrates their potentially significant contribution to dietary PFAS exposure and environmental contamination during production and disposal. (via Fluorinated Compounds in U.S. Fast Food Packaging, Environmental Science & Technology Letters)

According to a news release from Science Daily, previous studies have shown that these PFASs can contaminate the food and when consumed, accumulating in the body.

“This is a really persistent chemical,” said Graham Peaslee, a professor of experimental nuclear physics in the College of Science at the University of Notre Dame, who tested 407 samples of packaging material.

“It gets in the bloodstream, it stays there and accumulates. There are diseases that correlate to it, so we really don’t want this class of chemicals out there.”

Science Daily says PFASs have been previously linked to kidney and testicular cancers, thyroid disease, low birth weight and immunotoxicity in children, among other health issues. The chemicals take many years before just 50 percent of the intake leaves the human body.

“These chemicals don’t biodegrade. They don’t naturally degrade. They persist in the environment for a very long time,” Peaslee said.

Samples were collected from a total of 27 fast food restaurant chains including McDonald’s, Burger King, Chipotle, Starbucks, Jimmy Johns, Panera and Chick-Fil-A, in and around Grand Rapids, as well as Boston, San Francisco, Seattle, Washington, D.C. The study did not include takeout containers, such as Chinese food boxes or pizza boxes.

Researchers reached out each of the fast food chains that had been included in the study to see if they were aware of the chemicals used in the production of the packaging. Only two responded, both stating they believed their packaging was free of PFASs — one going as far as to say that it had received verification from it’s supplier, although test results show both had tested positive for a “substantial amount” of chemicals.

“This is a wake-up call for those companies and the consumers,” Peaslee said.

Those involved in the study are hopeful the results will encourage fast food restaurants to choose nontoxic alternatives such as plastic coatings, aluminum foil or wax paper.