“So, this person on the next episode is gonna try something called ‘hypnobirthing,'” I told my husband.

Six months pregnant with my first child and preparing to watch what must have been my 375th episode of A Baby Story, I uttered these words with barely concealed skepticism and disgust. At the time — nearly 11 years ago — my primary knowledge about childbirth had come from three main sources: (1) birth horror stories told to me by friends and family, (2) film depictions of labor that were rife with emergency cesarean sections and flailing women whose necks were one vertebra shy of a Linda Blair spin, and (3) you guessed it: A Baby Story.

Mostly, these sources had taught me that labor was the only time where it was socially acceptable for women to threaten to murder the people around them. They had given me no indication that self-hypnosis would be anything but an ineffective, possibly laughable labor comfort technique.

In fact, I thought that hypnobirthing sounded on par with juggling bowling pins or invoking the mighty hammer of Thor in terms of its potential usefulness during labor. I wanted no part of it. Unless, of course, I could take part in a little schadenfreude as I watched what I assumed would be a Baby Story train wreck.

But then the train wreck didn’t happen.

Instead, I saw a woman who appeared calm and in control as she labored. She coped with her contractions with ease. Sometimes she was chatty. Other times she even smiled. And then she was totally alert and self-possessed as she welcomed her brand new baby into her arms.

Better yet? There was not one single “You are getting very sleepy” chant throughout the entirety of her labor.

I think I waited a whole six hours before I ordered a hypnobirthing at-home course for myself.

I’d always assumed that hypnosis involved altering one’s mental state to the point where one would be completely out of control of their actions and decisions. But hypnobirthing, I learned, is more about elevating endorphin levels, relaxing one’s muscles, and developing self-soothing techniques to use during childbirth. In other words, hypnobirthing promotes control. It’s just a deliberate, calm, and flexible sort of control.

Months later, however, I didn’t get the chance to use all of my hypnobirthing skills during labor. I ended up needing a cesarean section before I experienced even a mildly intense contraction.

But the hypnobirthing methods I learned weren’t just for unmedicated births. They weren’t only for vaginal births either. They were also helpful during and after cesarean sections.

As I waited for my doctors to repair my incision, I used my hypnobirthing techniques to stay calm and focused on reuniting with my baby. I narrowed my attention to the parts of my body that I could still relax — the parts that weren’t completely numb. I unclenched my fingers. I loosened my shoulders. I even released the tension in my eyebrows.

When I held my new baby in my arms, I used my hypno-skills to keep my mind off of my incision pain and on my beautiful son. I visualized all the pain and tension leaving my body, zooming out of the recovery room and into the night. Of course, the pain was still present, even with a dose of post-operative narcotics being pumped into my body. But somehow, that mental image — one I had practiced conjuring up for months — made that pain a little less intense, a little more manageable. And in a moment when many mothers feel out of control, I was grateful to feel so in control.

I VISUALIZED ALL THE PAIN AND TENSION LEAVING MY BODY, ZOOMING OUT OF THE RECOVERY ROOM AND INTO THE NIGHT.

A couple years later, I became pregnant with my second child. Planning a VBAC (or a vaginal birth after cesarean), I intended once again to use the techniques (envisioning light, thinking pleasant thoughts of safe, cozy places) during labor.

As luck would have it, I used them for all 15 hours of labor.

Practicing hypnobirthing during those first few hours of contractions was easy. I imagined jars of warm liquid light pouring into my body, carrying streams of relaxation all the way out to my fingers and toes. I pictured calming places until contraction was over. 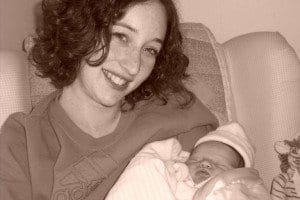 I used all the hypno-techniques I’d practiced until I couldn’t any longer. Because eventually, labor got hard. It got intense. It got to the point where I felt only pain. Gallons of boiling pain.

Yet despite this pain — and pain is what it was — I never felt out of control. And though I didn’t deliberately practice my self-hypnosis exercises near the end, I never departed from the state of outward peace that I’d cultivated throughout the earlier phases of my labor.

My mother even told me, “Sometimes we couldn’t even tell when you were having a contraction. I’ve never seen anything like it. You just looked so calm and in control during your whole labor.”

Using self-hypnosis during labor did not take all that pain away, but it did give me a sense of calm and control during a time of heightened vulnerability. It gave me peace when my body seemed to rage against itself.

It gave me the exact frame of mind that I wanted when I eventually met my new babies.

Hypnotherapy Helped Me End a Toxic Relationship
Scroll to top